Travis Gaertner is an elite athlete.

He was born without a left leg and with only half of his right leg. But being in a wheelchair hasn’t kept him from being extremely active. And it hasn’t stopped him from the highest levels of athletic competition.

Gaertner, who lives in a Seattle suburb, earned Paralympic gold medals while competing with the Canadian team in wheelchair basketball in the 2000 games in Sydney and the 2004 games in Athens. 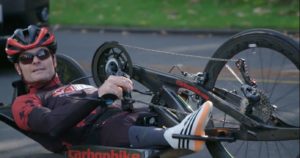 Gaertner, who became a U.S. citizen in 2012, now has his sights set on more Paralympic competition. The 38-year-old is training for a spot in the 2020 Tokyo games in handcycling, a version of cycling that uses a hand-powered three-wheeled bike. His drive to return to the Paralympics stemmed from a trip to a gym.

“As somebody with a disability, you need to feel like you’re stable on the (fitness) equipment that you’re working on,” said Gaertner. “You need to feel like you can actually excel and work hard. I felt that way right off with the SCIFIT PRO1. The first gym that I got a membership with had a SCIFIT PRO1. After working with that for a while my hand cycling took off, that competitive bug came back and now I’m trying to pursue another Paralympic trial.”

Fitness has been ingrained in Gaertner. He’s been active and athletic since he was a child.

“My parents, from the get go, had myself and my siblings involved in sport and other healthy activities so that we didn’t have time for unhealthy activities,” added Gaertner. “As far back as I can remember, they had me in wheelchair basketball, wheelchair track. At a very young age I was actually even in gymnastics with a prosthetic leg.” 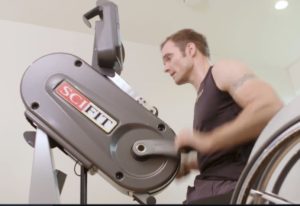 Even if you’re not an elite athlete, it’s hard not to be inspired by Gaertner’s dedication to fitness. He truly believes in the vitality he receives from his active daily life. He’s a great example for his three kids and for anyone who has trouble starting their own fitness routine.

“(Activity) becomes a way of life,” said Gaertner. “(My kids) see that way of life and they’re much more adept to want and to be physically active most of their life as well. It’s that much more important (for me) to stay physically active. Because I’m limited to a wheelchair it’s harder for me to get around. I’m able to do it right now. But what does that look like in 20, 30, 40 years if I want to maintain my independence?”